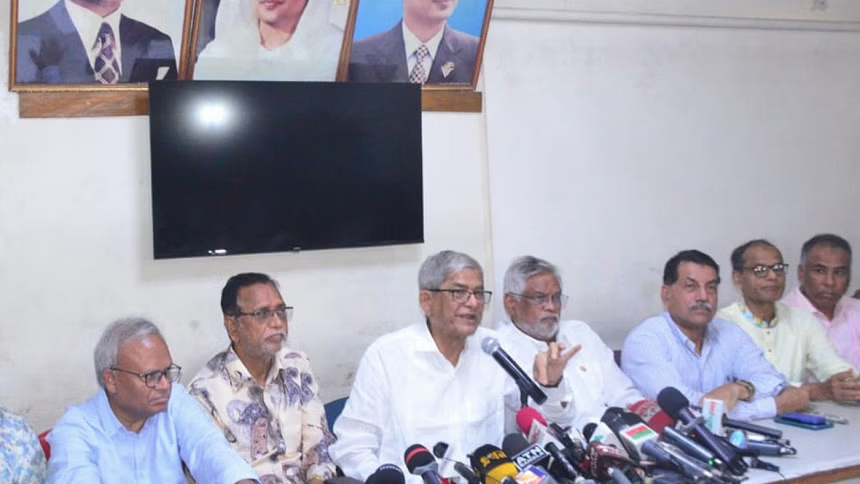 Fakhrul said that the ruling Awami League had put the country in danger, adding that there was no alternative to a street movement to oust the monster from power.

Addressing the Juba Dal activists, Fakhrul said that the youth should play a key role in ousting the AL from power.

Besides, in a statement, Fakhrul commented that the government had turned the country into a ‘danger zone’.

‘This government has turned the whole country into a danger zone with its law enforcement forces and their corrupt Chhatra League and Juba League,’ he added.

Fakhrul issued the statement protesting the police attack on a procession of ‘Progressive Student Organisations’ in Shahbagh in protest of the fuel price hike.

‘The police brutally attacked the protest rally called by ‘Progressive Student Organisations’. I strongly condemn and protest the incident of injuring scores of leaders and activists in this attack,’ Fakhrul said.

He said that the anti-people decision to raise nearly 50 per cent fuel prices by the ruling Awami League government had created an anarchic situation in the country.

Fakhrul said that when the global price of fuel oil fell, the authoritarian Bangladesh government showed a kind of arrogance by increasing the fuel prices.

‘When people have started taking to the streets with the logical demand of lowering fuel prices, the law enforcement agencies are being used as private baton forces to quell them,’ Fakhrul said.

He claimed that since the Awami League’s public base had collapsed, they had been constantly attacking the people through law enforcement agencies.

He said that all misdeeds, including looting and corruption, have turned Bangladesh into a police-state by burying democracy.

He said that the Awami League would carry out full-scale aggression on people to make the next election one-sided. This police attack is an example of that, said the BNP leader.

‘I want to say in a clear voice that no one could sit in parliament for long by building the infrastructure of misrule,’ he added.

Fakhrul said that the people of the country were determined to make Bangladesh a safe and peaceful place through a democracy by ending authoritarian misrule.

On August 5, the government increased the price of all kinds of fuel oils at the consumer level by about 50 per cent.