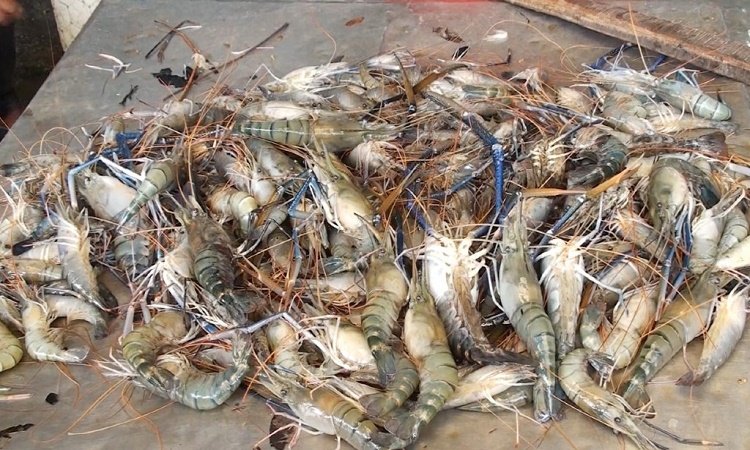 Time Digital Report: The country's second foreign exchange earning sector known as white gold is facing a worst time now. Due to the global economic recession, the price of Shrimp (locally known as Bagda) and lobster (locally known as Golda) has been fallen drastically in the international market. Apart from this, due to the increase in production cost, the shrimp farmers are facing a threat of livelihood without getting the demandable price.

The price has been declined by as much as Tk 700 per kilogramme over the last one month in the face of declining demand in the major markets in the West for higher inflation and the growing fear of recession, said farmers and shrimp processors and exporters.

Thousands of Shrimp farmers are facing in a great threat as Shrimp cultivation is their only source of income.

Frozen shrimp exporters are now buying and storing them at a lower price. However, owing to strong demand in the local market, the price of small-size shrimp is comparatively high.

Saltwater shrimp farming started commercially in Khulna in the 1980s. As high as 90 per cent of the shrimp produced in the region are exported to 32 countries.

After the improvement in the coronavirus pandemic at home and abroad, farmers had hoped to recoup the losses, but the current low prices driven by a fall in consumption in the export markets have shattered their hopes.

The industry now faces a challenging situation due to various reasons, including natural calamities and the increase in the price of fish feed and fish fry.

Due to the decrease in the prices in the global markets, more shrimps are being sold in the local market.

Abdul Hannan, a semi-intensive shrimp farmer in Khalilnogor village of Satkhira sodor upazila has been growing shrimp for the last ten years.

"Buyers did not show any interest in buying shrimp from our ponds. So, we were bound to sell at lower prices," Abdul Hannan.

In the past four months, the farmer has spent more than Tk 6 lakh to purchase fish feed and medicines and pay for labour and other costs.

"I would have made a profit if I could get a fair price," he said. Now, he worries if he will be able to repay loans.

Monoj Bairagi, a farmer in Khalashibunia village, has cultivated shrimps in 85 decimals of land.

The farmer, who has been cultivating semi-intensive shrimp for the last five years, has spent Tk 22 lakh for the current season. He borrowed Tk 8 lakh from microfinance institutions and relatives, but does not know how he would pay them back.

"How will I survive in this situation?" he questioned.

More than 250 shrimp farmers in Khalashibunia village are staring at losses for the low prices of shrimps. Most of them have borrowed money from banks or microfinance institutions, said Pabitra Roy, a member of the local union council and a shrimp farmer.

"We were dreaming of profits. Now, I am worried because the price has fallen."

Farmers in Khulna, Satkhira and Bagerhat say buyers are reluctant to visit shrimp enclosures to make purchases directly from local fishermen although they used to do so in the past. So, fishermen are trying to bring shrimps to the markets in the district town and the doors of frozen food companies.

Many farmers have been compelled to sell at a low price in the local market in a bid to narrow losses.

Many businessmen told us that they were not buying shrimps now.

Insan Ali, a businessman in Khulna, said most shrimps go to European countries.

"However, we have been informed that exporters are not able to send shrimps for two months. For this reason, companies are constantly reducing prices."

Inflation in the eurozone hit 10.7 per cent last month.

He is sending small-sized shrimp to local markets of the country as its rate is good though the price is decreasing day by day.

Inflation has remained at elevated levels in Bangladesh for several months as well for the war-induced crisis. It stood at 8.52 per cent in October.

"Due to higher inflation, we are not getting orders. Prices have fallen as the risk of the world falling into recession is growing."

Atul Kapali, a farmer in Betaga of Fakirhat, has cultivated lobsters in four ponds spanning 95 decimals of land.

Bagerhat District Fisheries Officer ASM Sohel said thousands of farmers are in a dire situation due to low prices of shrimp.

Joydeb Paul, district fisheries officer in Khulna, says the government is implementing a project with support from the World Bank so that farmers can increase production.

"We need to focus on national and international markets where shrimp farmers can sell their products at a fair price."

Farmers cultivated shrimps in 59,322 enclosures covering a total area of 31,135 hectares in the Khulna district. Some 33,271 tonnes of shrimp were exported from Khulna, Bagerhat and Satkhira in the last financial year.

The fisheries department has trained 7,000 shrimp farmers in Khulna, Bagerhat, Satkhira, Jashore, and Gopalganj under the World Bank-supported Sustainable Coastal and Marine Project. It is providing shrimp fries and funds to 3,000 farmers.