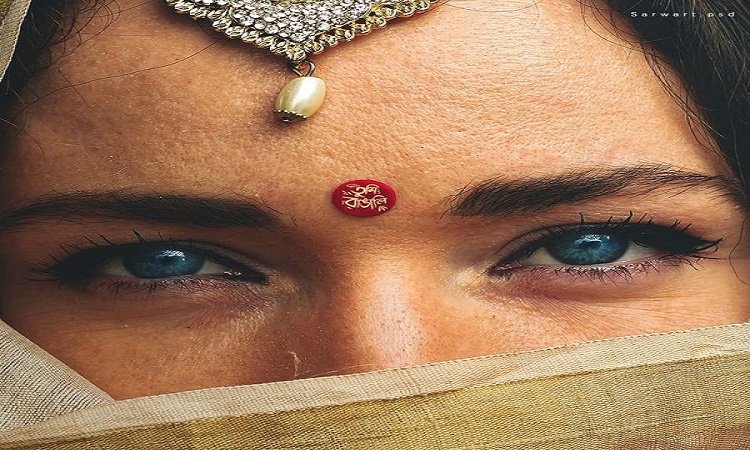 Time News Desk: Bangladeshi social media are busy with social discourse for Tip (a colourful round adornment on the forehead) for a week long. It outsets Lata Samaddar, a female teacher of Tejgaon College in Dhaka. She charged a policeman at Sher-e-Bangla Nagar police station following an incident in the capital’s Farmgate area as police personnel teased her for wearing a tip on her forehead.

Meanwhile, the incident has been viral on the internet. A vested quarter has made it an issue to humiliate Islam and practicing Muslims in Bangladesh. That interested group tried to make it a fruitful drama but the inquisitive found the incident false.

Many elite people talked about this issue even Education Minister Dipu Moni, a parliament member, Suborna Mostofa, and some artists involved in the issue. They talked in favour of this issue. But many people criticized the incident maker as the real scenario is exposed after a couple of days.

Time News BD is presenting the cross-talk about the incident quoting the social media posts.

Bangladesh Pratidin, a Bangla Daily News Paper published: A couple days ago, a woman was harassed for wearing a tip on her forehead. Actor Saju Khadem posted a picture on Facebook after tipping his forehead in protest of the incident. He felt like bullying himself in protest of harassing the woman. When came to talking about this, Saju Khadem said sadly, "What else will happen if we talk about all this! We also have to be bullied when protesting".

A woman has been treated unfairly. Is it not our duty to stand by his side? But people are using all sorts of bad words and making abusive comments as I protested the issue. Those who have such a dirty mentality, what should they do? They are also Eve teasers. ' Taslima Nasrin, a Bangladeshi exile writer said in Facebook Post: Tip Tip Tip! There are many ways of adornment for girls. But there is nothing more decorative for men. The men cannot wear various types of ornaments like miniskirts, sharee, high heels, even the tip. Muslim men have made black marks on their foreheads by knocking on the ground in the greed of the imaginary heaven for the sake of an imaginary God. That is their black tip on the forehead. Farjahan Rahman Shawon said in an FB post: “Television once told me during Pakistan period that tip cannot be wearied. Then I said, if the tip can't be wearied, then we won't sing. Then the other girls also stood behind me.” Faraeji Andolon, a FB page post: How did the so-called feminists target a beard and cap wearied policeman. They humiliate that cop and arranged to sack his job.

The real incident is:

A police constable, Nazmul was waiting to receive his wife after a checkup with a specialist gynecologist. When his pregnant wife walked closer to her husband, a woman (Lata Samaddar) ran with an illusion and puts her foot on the pregnant woman's leg. Then Nazmul's wife screams in pain. Nazmul went near to them while the two women then get involved in the argument. At a stage, there is some quarrel between Nazmul and Lata Samaddar. The woman wearing the tip addressed Nazmul's wife and said, " walks.... wearing a Hijab!, don't look at the side."

It did not fall into the category of eve-teasing, because there is no man teasing a woman in front of his wife in history.

Lata Samaddar, ex-drama student and lecturer of the fine arts make the police in trouble and her pregnant wife lodged against the police. When she (Lata Samaddar) guessed her fault deeds with the cop's wife, she tried to hide the real incident and posted an emotional false status on Facebook and tagged his bosom friends on the tip issue. She (Lata) ignored that the police were there with his pregnant wife. It was suppressed unknowingly. Mohammad Jewel said in an FB post: The “Tip” of the forehead was introduced as a sign of identification of prostitutes in the time of Prophet Ibrahim (AS). Namrud built a huge fire pit of eighteen miles to burn the Prophet Ibrahim (AS). It was so big and so hot that it was not possible for any human being to throw Hazrat Ibrahim (AS) there. Finally, a charak was made through which Hazrat Ibrahim (AS) could be thrown into the fire. But by the command of Allah, the angels were leaning on one side of the wheel and the wheel could not be turned. Then the devil gave Namrud the evil idea to bring some prostitutes and put her in front of the charak, because the angels cannot stay in this condition. This was done and the angels left, they were able to throw Hazrat Ibrahim (AS) into the fire. Later those girls were given state status and their heads were covered with tilak. Which is now known to us as the “Tip”. Shabali Shahab said in an FB post: In the age of prophet Ibrahim (AS) "Tip" was the sign of identifying a harlot.